The Flea Market and Camere Civico 15, vintage and creativity in the local community

Through the years, the Flea Market has become a more and more important reality for the city of Arezzo. From this experience, the Camere Civico 15 gallery was born: an open space dedicated to design, hosting exhibitions, classes, markets and private collections. We had a chat with Silvia Ciarpaglini, the creative mind behind these two projects (which got her nominated for local of the year in Arezzo), in order to understand how these activities come to life and the importance they have for the local community.

How did the Flea Market project come to life? 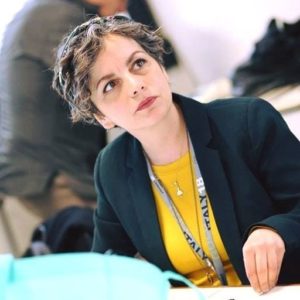 The Flea Market was born because we were in a café in the Campo Marte area, which at the time (7 years ago), was going through a hard time. We were the owners of the café through the association Bistrout that helped starting up local businesses, in some way also by financing them. The Market was an idea to try to expand the audience. Clearly, we attracted many young people with the events we used to do at the Bistrout, linked to music, theatre and art. Then mainly to redevelop the park itself, since we’ve been robbed around four times during the period we were thinking about this project, so we felt the need to organise something aimed to a large portion of the citizens. Keeping in mind that I’m a big fan of vintage and collector’s items, it was also a priority to maintain a circular economy, adding to many more factors that pushed us to create the Market.

What does the Flea Market mean to the Arezzo Community?

Initially, it basically meant to go out and meet in a big social context, because spots like this probably do not exist anymore in the city. Supermarkets represent those places where you do not meet, nor know nor grow. Instead, right from the beginning, the Market has become a spot where locals participate and where projects, collaborations and events take place. There is so many more collateral initiatives. Clearly, there is a cooperative dimension mainly for a certain age range, in which people can develop new friendships, acquaintances and also find financial support. Especially at the beginning, the majority of people were struggling because they had just been fired, they had not worked in a long time or they could not make ends meet. When we expanded from 250 to 700 stalls at the Centro Affari e Congressi, the most amusing part of the Market came out. There were many young people who didn’t have financial problems, but for whom it became fundamental to promote a circular economy: the idea not to throw away old objects but to resell them, and with the earned money, buy something new. This can be defined as a process of raising awareness through intelligent tourism. 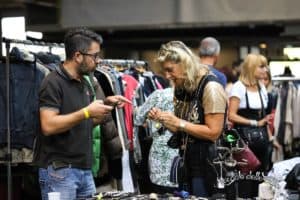 This year, the oper air Flea Market will take place in Monte San Savino. How do you think you’ll take advantage of this new location?

Since the Market is an event that contains stories of people and objects, an ancient village allows us to tell its story and the one of those who live there. We usually mix all of this, starting simply by objects and memories, and everything regarding the past. We will occupy the borough entirely, and we also mean to bring the stalls as well as the artistic dimension which is also typical of the Market: exhibitions, presentations, activities for kids and so much more.

Camere Civico 15 gallery was born last year. Can you describe the project?

Camere Civico 15 was born from the experience of the Flea Market. Right from the beginning, we have displayed handmade products in the market as well as hosting artists and the Artefice association who has followed us through the years. The need to be all together, to find a space where it would be possible to exhibit in the city, in order to guarantee a certain visibility and financial support, came alive since no public places like this exists here nowadays. Camere Civico 15 was once the municipal gallery and there was a clear interest in redeveloping lost places, we occupied a non-indifferent empty space.