A few days ago, I had the opportunity to meet Andrea Trovato, Opera Viwa’s artistic director.
With Andrea, we discussed beauty and the key words of our morning were two: music and territory. Opera Viwa, in fact, spreads musical culture and promotes artistic and panoramic beauties from Arezzo’s territory.
Through concerts, training events, and guided tours, the association promotes a network between music operators and musicians; by doing so, it has made a name for itself internationally for instrumental concerts and, particularly, for the organ ones.
Keep on reading to know what he told me and don’t miss out their initiatives!

When was Opera Viwa born and what’s its purpose?

The association was born in 2006 as a bond between music operators and musicians, while before we used to work individually. With Opera Viwa, we gave life to a project engaging several villages in the province, making them participate to music productions of great depth, thanks to Mr. Fabio Taruschio, our President, and to Ms. Silvia Martinelli, vice-president, who have stayed by my side through the whole artistic direction.

The spreading of music culture and young people’s education to music are among our association’s goals. This takes place through organisation of concerts, shows, masters, meetings that address schools of any grade. 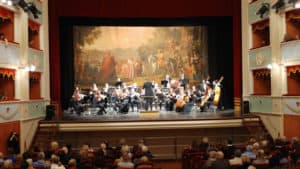 The festival “Terre d’Arezzo Music Festival” was born in this context: what is it about?

It’s a classical music festival that has now reached its 14th edition. During every summer, from July to August, in Arezzo and its surroundings, we organise concerts in which visitors can enjoy live classical music with polished acoustic musical instruments. The title “Terre d’Arezzo Music Festival”, wants to summarise the double meaning of this event: on one hand the high-standards artistic choices, while on the other, the promotion of the territory with all its hides gems, whether it be from the landscape point of view, or the artistic and historical one. The festival involves around 10 villages in Arezzo’s area from Valdarno to Casentino and from Val di Chiana to Sansepolcro.

The central point of the festival has been represented by the monumental churches in Arezzo, for several years now. Thanks to the collaboration with Arezzo-Cortona-Sansepolcro Diocese and the “Centro Guide Arezzo e Provincia”, during concerts in churches, there is always an historical introduction; it tells the story of the sacred building, the art pieces it contains and organ that is played. This way, music is means of cultural growth and promotion of the territory.

Can you tell us about a few training courses you managed?

Through the years, Opera Viwa has organised several training activities for students of all ages. Thinking of primary and middle school students, in 2012 we organised the season “La Musica non solo in Classe” in Cavriglia. The local theatre was hosting concerts and meetings that worked as lessons for students and opportunities to meet the musicians. For the students in Arezzo, instead, we organised “Aspettando Arezzo Organ Festival” a one-week summer camp in which kids could get to know the organ through classes and recreational activities.
During winter 2017-2018, we organised the Piano Festival “Città di Arezzo”, dedicated to the memory of Arturo Benedetti Michelangeli, with four important concerts in Teatro Petrarca. Some of the most internationally famous pianists were the protagonists, starting from Leslie Howard. After each performance, the artists held a concert-class for the students of Liceo Musicale di Arezzo. 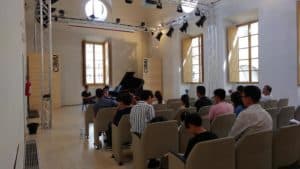 In 2018 we organised a very important masterclass dedicated to the piano, and open to students of all ages. The school was called “International Piano Master”: for eight days, the “Casa della Musica” in Arezzo hosted renowned pianists coming from all over Italy, South America, USA and China. At the end of the master, teachers and students played together in a concert.

Let’s talk about organ music: how is this discipline relevant in Arezzo?

Many people don’t know, but Arezzo boasts an organ heritage which is considered historically prestigious and diversified in each church, containing organ from different periods.
In the Cathedral, there is the 1536 organ by Luca da Cortona, which is one of the most ancient working organs in Italy. This was subject of a restoration in 1980 by the Gabinetto di Restauro di Firenze: a landmark in restoration, which brought the instrument to its original sound. 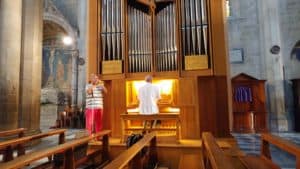 Organ in the Cathedral of Arezzo

In the Badia delle Santissime Flora e Lucilla, there is an intact organ from 1600, in Chiesa di Santa Maria in Gradi one from 1700, while on one in Chiesa della Santissima Annunziata is from 1800.
The presence of organs from every period has made sure that “Arezzo Organ Festival” became known in the organ industry; in fact, many musicians contact me to know the characteristics of these organs and to come to study them in Arezzo, from Mexico, Spain and Austria.

Can we mark some dates on our 2020 calendar?

We are already working on the 2020 “Terre d’Arezzo Music Festival” and “Arezzo Organ Festival” editions. We have fixed a few dates with very important organists. The three main ones are between July and August 2020.
The master Przemyslaw Kapitula from Warsaw Cathedral, will perform in Arezzo Cathedral on 19th July 2020. On 26th, we will host Roman Hauser, owner of the organ in the Jesuit Church in Vienna. The third date is on 2nd August, in which the protagonist is Jean-Christoph Geiser, owner of the organ in the Cathedral of Lausanne. This edition will also take care of the educational aspect: before each concert, there will be guided tours for adults and kids, in order to make them discover and know the characteristics of the organs in Arezzo.
The other appointments will be fixed in the next weeks: we are in contact with the Paris Young choir and with other performers who wish to participate to our festival.