The discipline of beauty

Mary Said What She Said, by Robert Wilson

When you are clumsy and untidy as I am, it becomes quite hard to accept the aesthetic perfection of a theatrical performance. I find myself reflecting on something that is completely different from me, but at the same time it intrigues me; when this happens, there is only one thing to do, which is to shut up and listen with your ears and your eyes as well. 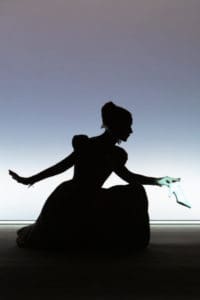 On Sunday 13th October, Mary Said What She Said went on stage at Teatro della Pegola, in Florence. Directed by Robert Wilson, on the dramaturgy of Darryl Pickney, Isabel Huppert narrates the torments of Mary Stuart, Queen of Scotland, condemned to death by the Queen of England, her cousin Elizabeth I, who suspected her to be involved in a plot against her. On the last day of her life, Mary Queen of Scots is at Fotheringhay Castle, in England. During Huppert’s monologue, the spectator travels back to the Queen’s youth, spent in France at Caterina de’ Medici’s court. Four Marys accompany her everywhere, soon becoming symbol of the carefree life Mary Stuart managed to live only for a short time.

She arrives in Scotland, country which she knew very little about. The resentment of catholic Lords who could not quite suffer her tolerance towards Protestants. Her marriage to Lord Darnley, Elizabeth I’s cousin, which was seen by everyone as an act of mere passion rather than a premeditated move. Her blind love for her son James. We see stubbornness only strong women have, when her husband asks for the Matrimonial Crown in order to gain equal power, but she refuses his demand.

For one hour and a half, the stage was enchanted with lunar light, split in half and fixed again by Huppert’s voice and Einaudi’s music, sometimes violent and angry, while others grieving and tormented. Every small detail was meticulously curated, and just by looking at the protagonist’s shadow on the stage, I was left speechless. I do know that when it comes to theatrical performances done by world-famous artists, this phrase is a very banal one to say, but in return, it made it possible for me to reflect on how the accurate study of aesthetics carries discipline.

We are usually led to think that what is beautiful cannot be defined, cannot be constrained since it is influenced by the subjectivity of the individual. So I think of Aristotle and his definition of ousìa, which is the Substance, shape and substance together. The shape, as harmonious as it may be, remains senseless if the substance is missing. The contrary is also true: a substance rich in meaning, but not properly disciplined, remains chaotic and incomprehensible. The fusion of these two concepts gives life to what is beautiful: the richness of the meaning is disciplined and guided by an harmonious and well-structured shape, and this is what I saw in the performance. 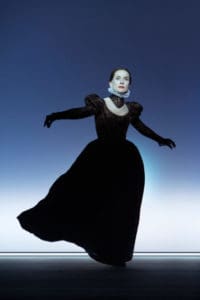 I will give you further proof that this harmony between mass and shape in Robert Wilson’s play has been a success. I was sitting in the balcony and I had a complete overview of the audience: for one hour and twenty minutes, the mobile phones of almost one thousand people were kept turned off and inside their bags.